So the Deloitte Football Money League has been published for 2009, and for Liverpool fans, it makes for very interesting reading.

The table - which ranks European clubs in terms of revenue generated – shows the Reds have risen a place to seventh for the 2008-09 season, but also highlights the gap that is emerging between the club and the rest of English football’s ‘big-four’ cartel.

The explanation for such a deficit requires only a simple glance at the breakdown of Liverpool’s revenue streams, in comparison with other clubs. And in particular, one area: match-day revenue.

Dan Jones, partner for Deloitte's Sports Business Group spells it out: "When compared to Arsenal, Chelsea and Manchester United it is the area of match-day revenue where Liverpool noticeably fall short of their rivals.

“Liverpool made £42.5 million in match-day revenue whilst Manchester United and Arsenal - with their bigger stadium capacity - made more than £100 million, and Chelsea – even despite a smaller ground - earned £75 million. It is a gap Liverpool have to bridge, and they are acutely aware of that."

For a few weeks after the news about his extra-marital activities was published, Chelsea captain John Terry was reportedly confident that it would all blow over without any negative consequences for him.

Oh, how he must reflect wistfully on such hubris these days. Since the storm blew in he's lost the England captaincy he was so proud to hold, been forced to fly to Dubai to save his marriage, and seen his form collapse along with that of his team's.

Before his dalliance with Wayne Bridge's ex-girlfriend was announced, Chelsea had won every game in January and given themselves a four-point lead at the top of the Premier League. Since then, they have won only one high-profile game, against Arsenal, and lost three matches in which they could, and perhaps should, have done better.

Terry has always been lauded for his mental attributes, but clearly toughness isn’t one of them. Even the 29-year-old’s most fervent admirers — and, judging by the contrasting reactions to him and Bridge at Stamford Bridge on Saturday, there are still many — must admit his performances have clearly been affected by all the off-field speculation.

Manchester City missed the opportunity to regain fourth place in the Premier League table as they went down 2-0 to Everton at Eastlands.

Villa blip at home to Sunderland

Sunderland dented Aston Villa's bid for fourth spot in the Premier League with a 1-1 draw at Villa Park.

Sunderland took the lead midway through the first half through Fraizer Campbell only for John Carew to draw Villa level eight minutes later. 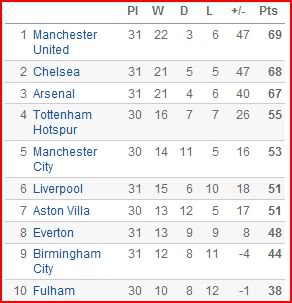 Chelsea beat Aston Villa emphatically at Stamford Bridge to send out a strong message to their title rivals.

Four from Frank Lampard made him the third-highest scorer in the club's history on 151 goals and he was assisted by a double from Florent Malouda and another from substitute Salomon Kalou.

Chelsea were stunned by a 29th minute equaliser from Villa's John Carew but Carlo Ancelotti's side were in cruise control in a devastating second-half that brought Villa's 10-match unbeaten run to a crashing end.

Manchester United defeated Bolton Wanderers at the Reebok Stadium in the late kick-off on Saturday.

Manchester United made light of Wayne Rooney's absence to put four past Bolton at the Reebok Stadium.

Rooney was ruled out with a bruised foot that should not stop him facing Bayern Munich on Tuesday.

But after Chelsea scored seven earlier in the day, United still responded in kind, Dimitar Berbatov scoring twice and Darron Gibson adding another after Jlloyd Samuel had broken the deadlock just before half-time with a bizarre own goal

Liverpool kept their Champions League hopes alive with a 3-0 win over Sunderland.

A scintillating first-half performance set the tone for a one-sided Liverpool victory at Anfield.

Fernando Torres struck a brilliant opener in the third minute and Glen Johnson's deflected strike made it 2-0 after 45 minutes in which the hosts could easily have scored six.[u][b]

Carlos Tevez hit a hat-trick as Manchester City beat Wigan Athletic to boost their hopes of a top four finish.

The relegation-threatened Latics battled hard and frustrated City until 18 minutes from time when Tevez broke the deadlock.

Emmanuel Adebayor nicked the ball away from stand-in keeper Vladimir Stojkovic to leave the Argentinian with a simple tap-in.

Two minutes later Tevez ghosted in to fire home from close range and he completed his treble with a fine finish six minutes from time.

The visitors had defender Gary Caldwell sent off on 55 minutes for a lunge on Tevez. 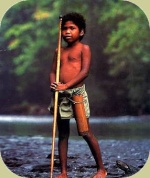